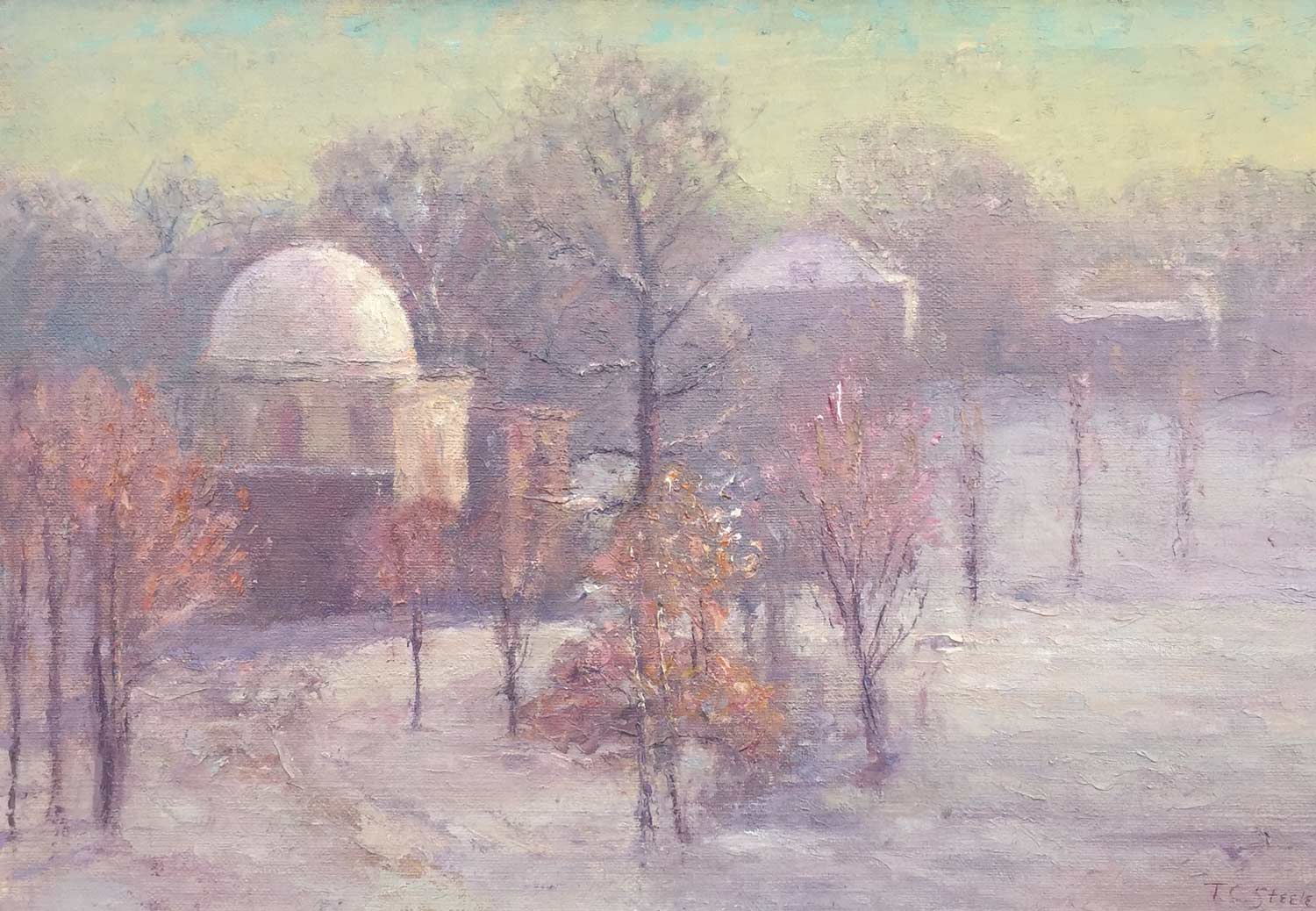 One of Steele’s most well-known paintings of those painted on the Indiana University Campus.

Steele’s affiliation with Bloomington and Indiana University began when he and his wife Selma spent their winters in a house close to campus and returned to the “House of the Singing Winds” in Nashville, Indiana during the summer. “Despite Selma’s reluctance to maintain two studios, she observed that her husband truly enjoyed interacting with the students and faculty”.1

“Painting at his easel on the college campus, Steele became a common sight and he won the hearts of many people, who casually watched or talked to him. The men’s organization called the Indiana Union bought seven of his Brown Country landscapes, which now hang in the Indiana University Memorial Union, and the Bloomington Rotary Club asked him to become an honorary member.”1

In 1922, the Indiana University Trustees, at the suggestion of President William Lowe Bryan, named Steele “Honorary Professor of Painting”, becoming the first artist in residence. President Bryan, encouraged the Trustees to consider this position “as the arts were as important to the University as scholarship”.2 Steele was provided a studio on the top floor of University Library (now Franklin Hall).

The observatory in the painting, built in 1900, is named after Daniel Kirkwood, an astronomer and IU professor of mathematics, who discovered the Kirkwood Gaps in the asteroid belt between Mars and Jupiter in 1866. The facility contains a 12-inch refractor telescope and other astronomical equipment.

The observatory is no longer used by the University for research, but is still used for instructional purposes, and outreach events. Viewing is available every clear Wednesday when classes are in session. No reservations are necessary. A typical Wednesday visit allow visitors to look at bright night sky objects, such as the moon, Jupiter, Saturn and some globular clusters and nebulae.

The Kirkwood Observatory is located at 119 S. Indiana Avenue, Bloomington, IN 47405, just south of Sample Gates (main entrance to campus) between Dunn’s Woods and the Maurer School of Law.