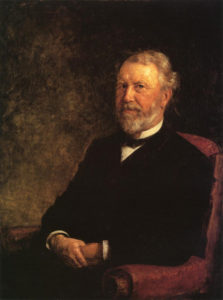 In this portrait by T.C. Steele, Governor Albert Gallatin Porter sits in a red arm chair, gazing directly at the viewer. Porter has his hands clasped on his lap. He wearing a black coat and white shirt with a black stock.

“In 1873 Steele moved to Indianapolis and opened a studio on the Bradshaw Block where he remained until 1880. Portrait painting continued to be his chief activity during that period, and although he painted several prominent people, he was not commissioned to portray the governors then in office. In 1880 he went abroad for more intensive training at the Royal Academy of Art in Munich and stayed there five years.

Upon his return to Indianapolis in the summer of 1885, Steele opened his studio again and began taking commissions for portraits. One of his first was that of Porter, whose term as governor had ended in January. Circumstantial evidence points to the probability that Porter postponed having his portrait painted until Steele returned, knowing something of the artist’s ability and reputation. It must have been an important assignment for Steele, in that it would help greatly in re establishing him in the city.

Technically the portrait reflects the method of painting taught in Munich. The tones are dark, the color scheme is dominantly brown, and forms melt into the background. Steele has drawn Governor Porter’s features with a sure, steady hand, and has thoughtfully analyzed his model’s character. Porter appears as an intellectual and cultured man, wearing an expression that suggests a serious but kindly disposition. His attitude in the portrait is that of an accomplished jury lawyer.”1

« Through the Clearing
Bloom of the Grape »
Loading Comments...
X