Interior Scene with Daisy and Shirley 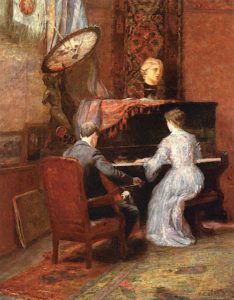 Daisy and Shirley were two of T.C. Steele’s three children (the other child, a son named Rembrandt who was called Brandt). See article Work Worth Doing: Brandt Steele, Designer and Potter on this website under Steele in the Media.

Daisy was the middle child of the three children of T. C. Steele and Mary Elizabeth Lakin and was born in Battle Creek Michigan on July 7, 1872 where the Steele’s had moved so the artist could complete commissioned paintings. The family lived in Battle Creek for two years prior to retuning to Indianapolis. Daisy married Gustave A. Neubacher, June 1, 1905. Gustave was Selma Nuebacher’s brother.

Shirley (son) was the youngest of the three children of T.C. Steele and Mary Elizabeth Steele.  Shirley married Mira (Almira) Daggett of Indianapolis in the fall of 1901. Some public records spell the name Myra D. Steele.  Shirley Steele can be found on the 1940 California census as living in San Joaquin, California with his wife Myra and a daughter; he was listed as 62 on this census record.

1Steele, Selma, Theodore, and Wilbur Peat. The Life and Work of T.C. Steele: The House of the Singing Winds (Indianapolis: Indiana Historical Society, 1966).