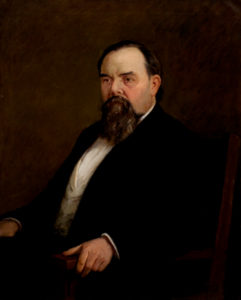 Oliver P. Morton served as governor of Indiana during the critical period of the Civil War, and, although his terms were marked by conflict between the governor and the legislature, historian James Ford Rhodes called him, “The ablest and most energetic of the war governors of the Western States.” Throughout the war he was known as “The Soldiers’ Friend” for his material support of Indiana’s troops, and remained one of the strongest supporters of the Federal government.

T. C. Steele painted this portrait of Morton as one of the epochal governors chosen for the centennial celebration in 1916 for the executive office, and pays tribute to Morton’s leadership through the Civil War period.

Since the pose is not the same as the official Governor Portrait Collection where Morton was painted by James Forbes, we know that Steele went to another source for his model; according to the local press the picture he used came from a relative of the war governor, “who declared the print an excellent likeness.” Steele’s version of Morton is more reserved in spirit and more restrained in tone and color than the Forbes work. The subject appears several years older, and he looks off to the left in a relaxed, thoughtful attitude.1