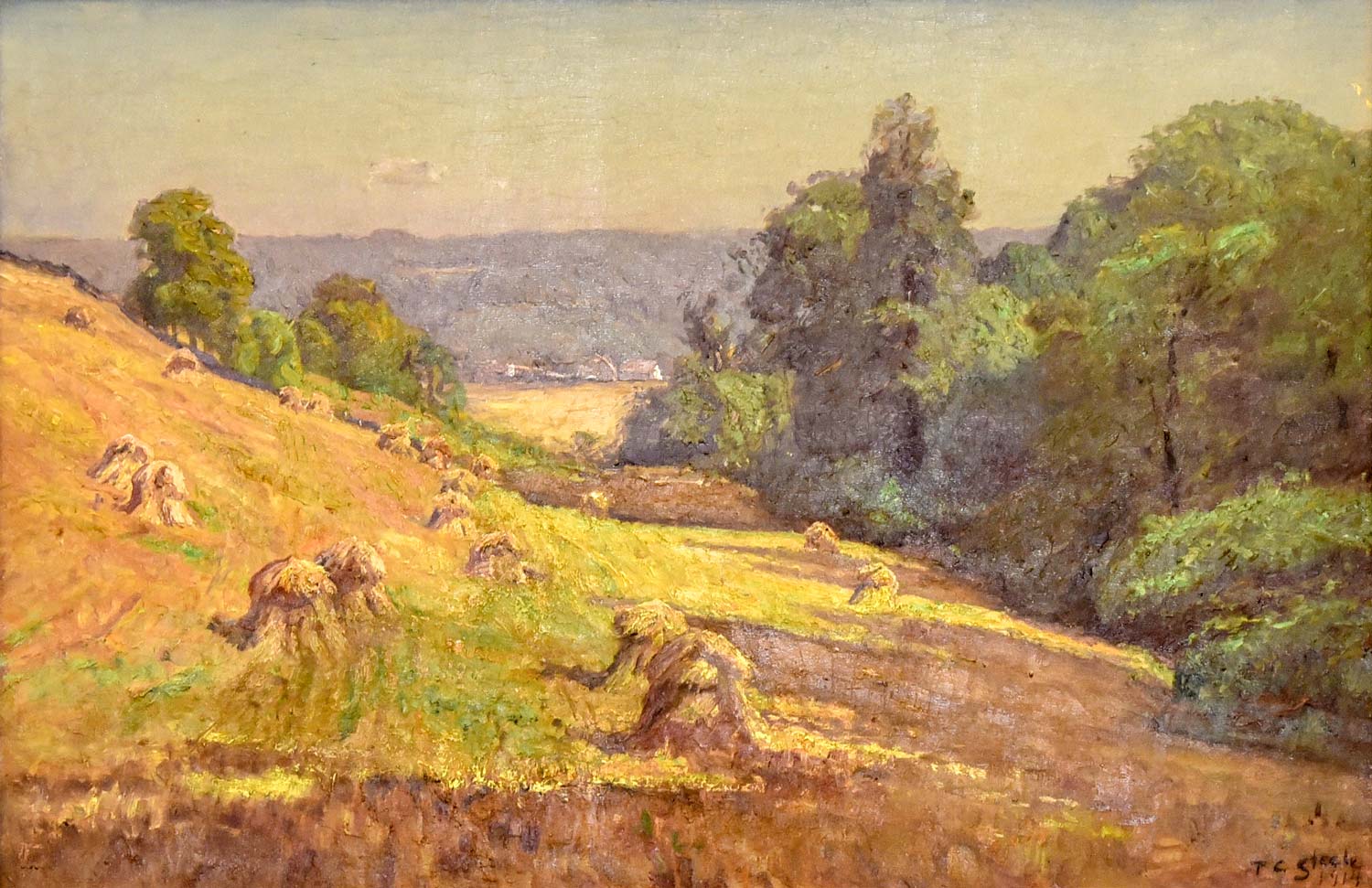 Painting and frame professionally cleaned by Indianapolis Museum of Art on March 26 & 27, 2011. Ron Crane and helper completed cleaning over 2-days in the basement of Waveland Carnegie Library.

T.C. Steele, one of Waveland’s most famous sons, donated this painting in honor of the opening of the Carnegie Library in Waveland in 1915 – It still remains in the intended spot above the fireplace.

T.C. Steele had warm memories of his Waveland years, which had a population of about 500 at the time.

“It is with pleasure and thankfulness I recall this little town, a village of five or six hundred inhabitants, where my childhood and youth were spent. It had the usual village stores and blacksmith’s and wagon and carriage shps typical of the period, but it was a community of more than ordinary intelligence and situated in a charming and pleasant country of prosperous farms.” 1

The Carnegie Library in Waveland, Indiana was opened on April 17, 1915 and a bronze tablet in the entryway reads “Gift from Andrew Carnegie”. There is still much of the original golden oak in the main room and the first reading tables are still being used for various activities.

Carnegie libraries are libraries that were built with money donated by Scottish-American businessman and philanthropist Andrew Carnegie. Over 2,500 Carnegie libraries were built, including those belonging to public and university library systems. Carnegie earned the nickname Patron Saint of Libraries.

Nearly all of Carnegie’s libraries were built according to “The Carnegie Formula,” which required a kind of matching from the town that received the donation. It must:

Carnegie’s personal experience as an immigrant, who with help from others worked his way into a position of wealth, reinforced his belief in a society based on merit, where anyone who worked hard could become successful. This conviction was a major element of his philosophy of giving in general, and his libraries are its best known expression.

164 Carnegie libraries were built in Indiana—more than in any other state.2

Samuel Hamilton Steele, the father of T.C. Steele was born in 1823 in Gosport where he farmed and had a shop working as a saddlemaker prior to moving his family to Waveland. Samuel Hamilton Steele would reside in Waveland the remainder of his life and again ply his trade as a saddlemaker at his shop located on the northeast corner of Cross and Howard streets. T.C. Steele was raised at 110 S. Cross Street and the family home remains today. The Greek Revival home (circa 1852) is listed on the National Register of Historic Places. Samuel Hamilton Steele died in Waveland on August 16, 1861 at 38 years old and is buried at Waveland Methodist Cemetery.

It is unclear what Samuel Hamilton Steele’s motivation and activities were between selling the farm in Gosport and leaving for Waveland in 1852. Some writing indicates the move centered on education and the Waveland Academy, incorporated January 16, 1849 and later changed to Waveland Collegiate Institute in 1859, with new charter to change the course of study.

The objective of the new course of study at Waveland Academy was designed for students who may not have the time nor means to take a full college course might, under the new charter, pursue a shorter course which comprised most of the branches taught in the scientific courses of the colleges, and obtain a degree. Waveland Collegiate Institute was controlled by the Crawfordsville Presbytery.3

1 Steele, Selma, Theodore, and Wilbur Peat. The Life and Work of T.C. Steele: The House of the Singing Winds (Indianapolis: Indiana Historical Society, 1966).