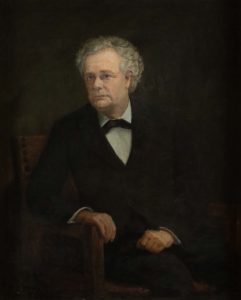 Dr. Fletcher was an advocate for public and mental health reforms and renowned for abolishing the use of physical restraints at the Indiana Hospital for the Insane in Indianapolis in 1883 of which he was superintendent. This institution later became Central State Hospital and today visitors can tour the oldest Pathology Building in the nation known at The Indiana Medical History Museum located on the former hospital grounds.

Steele painting on display inside the museum

Dr. Fletcher’s approach toward “moral treatment” for mentally ill patients was demonstrated by his burning of more than 500 straight jackets, covered cribs, restraint chairs, and similar devices in bonfires. He influenced generations of future physicians as a professor of medicine in Indianapolis. He also employed women teachers and staff during his tenure, and hired Dr. Sarah Stockton as an assistant physician in the women’s department. Dr. Stockton was the first female to hold that position. 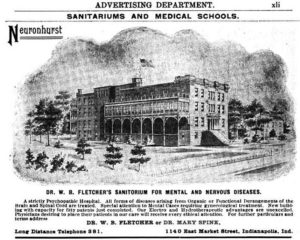 In 1888, Dr. Fletcher established a Sanatorium, known as Fletcher’s Sanatorium and then Neurohurst (after 1904) which was one of Indianapolis’s first private hospitals for the treatment of nervous and mental diseases in Indiana.

Dr. Fletcher studied at Indiana Asbury University (now DePauw University) and then attended the College of Physicians and Surgeons in New York City, earning his medical degree in 1859.

He also served in the Civil War in the Union Army. He was taken prisoner near Big Springs, VA while engaged on a scouting expedition and was sentenced to be shot, but was reprieved by General Lee and send to Libby Prison (Richmond, Virginia) where he was placed in charge of a hospital.1

Dr. William B. Fletcher died in 1907 at his second home in Orlando, Florida. His death was widely covered in both press and medical journals here and abroad. Hoosier poet, James Whitcomb Riley, memorialized Fletcher in his poem “The Doctor”, with a repeating line “Why not idealize the doctor some?”2