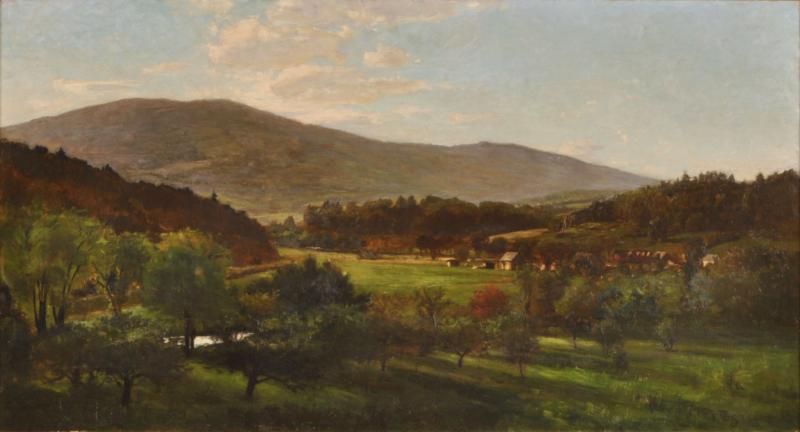 The painting of Okemo Mountain was created by T.C. Steele off the back terrace of the Allen Miller Fletcher home in Ludlow, Vermont. Steele painted this for Fletcher in return for him helping fund Steele’s art education at the Royal Academy of Painting in Munich, Germany from 1880-1885.

Allen Fletcher invited Steele to the Vermont estate in the spring of 1887 to spend four months painting. Steele created 15 pieces including Okemo Mountain. This painting was in the Fletcher family for nearly 130 years, and remains in the original frame to this day. The painting hung over the fireplace in the Fletcher mansion until 1950.

Fletcher’s Ludlow mansion, known as “Castle Hill” is now a resort & spa with nearby skiing available on Okemo Mountain ski resort. The ski resort is now built on the mountain featured in the painting. Fletcher’s heirs also donated property in Ludlow that is today the Fletcher Farm School, a non-profit educational center that offers instruction in the arts.

According to author Martin Krause in his book “The Passage – Return of Indiana Painters from Germany 1880 – 1905”, this visit to Vermont was Steele’s first real chance to paint the American landscape after returning to Indianapolis from Munich in 1886. From then on, he focused on his Indiana landscapers, rarely venturing out of the state.1

The Fletcher family was part of the gilded age of America with businesses in Indianapolis and New York. Allen Fletcher was born in Indianapolis in 1853, and later became Governor of Vermont from 1912-1915.

He is buried in Crown Hill Cemetery in Indianapolis, IN.